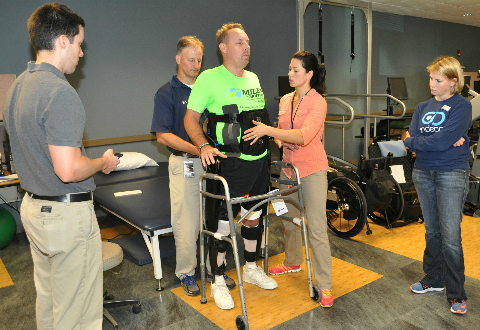 Thursday, July 14, 2016
James A. Haley Veterans' Hospital (JAHVH) physical therapists recently completed training in preparation for a new research project on a medical device designed to help people who are confined to a wheelchair stand and walk with mechanical assistance. The latest project revolves around the INDEGO, a powered lower limb exoskeleton that can enable people with spinal cord injuries to walk. According to JAHVH and CINDRR Health Scientist Samuel Phillips, researchers are looking at similar uses for the INDEGO, the ReWalk and the Ekso Bionics Suit. "All three of these devices are in what I would consider a first generation [stage] of a clinical device, so all of them have strengths and weaknesses and that's why we're investigating the use of all three devices. We believe that there are benefits to physiological changes, so we're actually measuring blood lipids and bone density, [since] these are benefits generally associated with standing and walking. We believe that since they'll be standing and walking using the exoskeleton, that they'll also see those benefits."

The INDEGO research project is funded by the Department of Defense. JAHVH is partnering with Vanderbilt University and the Mayo Clinic in the three to four year study. Physical therapists at JAHVH completed three days of training on the proper fitting and use of the INDEGO system. With the help of volunteers like Jeff Wagner, who was paralyzed in 2008 after cancer treatment, INDEGO master trainer Clare Hartigan, provided the training. The hospital received one therapy kit, which consists of three exoskeletons in small, medium and large sizes. Because the device is modular, parts from each size can be mixed and matched to fit each individual. "Each INDEGO weighs about 26 pounds and will accommodate any patient from the size of 5 feet 1 inch to 6 feet 3 inches, or 150 centimeters to 195 centimeters. They're capable of lifting a 250 pound person from a sitting position to a standing position," explained Steve Carlson of Parker Hannifin Corporation, maker of the INDEGO.

The research project is expected to begin in July or August, involving eight Veterans who will be trained to use the exoskeleton. Phillips explained that the study is comprised of three parts: 1) using the exoskeleton in an outpatient setting; 2) using the exoskeleton in an outpatient setting with added functional electrical stimulation to stimulate the muscles to make them work; and 3) a take-home trial. The research participants will have 28 training visits and three testing visits to JAHVH over eight weeks, and will return for occasional follow up visits over the course of the study, Phillips said. While the researchers will concentrate on the physiological benefits of exoskeletons, Veterans who have been confined to a wheelchair say there are psychological benefits as well.

Get help from Veterans Crisis Line

If you are in crisis or having thoughts of suicide, visit VeteransCrisisLine.net for more resources.