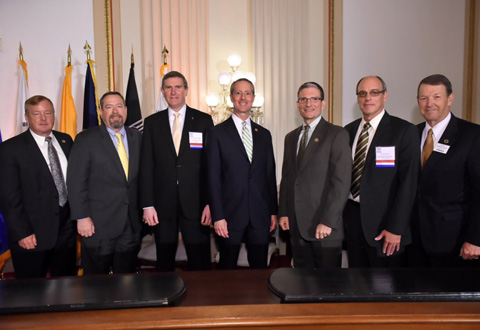 The Military Officers Association of America (MOAA) recognized five supporters of the military community with the association's highest awards on Capitol Hill in April, 2016. Retired Air Force Lt. Gen. Dana T. Atkins, president and CEO of MOAA, and retired Air Force Gen. Tony Robertson, MOAA chairman of the board, presented the awards at a ceremony signaling the start of the association's annual "Storming the Hill" advocacy event. (http://www.moaa.org/storming/)

Scott acknowledged his parents, who were in attendance. His father served in the South Pacific during World War II, while his mother's brother flew 31 missions as part of a B-17 crew. Scott shared three insights he realized during the course of his career serving veterans with war-related injuries: 1) listen to veterans; 2) be flexible and innovative; and 3) make connections. Scott cited the MOAA Tampa (Fla.) Chapter's Operation Helping Hand as an example of the benefits of the latter.

MOAA's Distinguished Service Award has been presented since 1997 to organizations or individuals not in Congress who have greatly aided people who served in the U.S. armed forces.

Get help from Veterans Crisis Line

If you are in crisis or having thoughts of suicide, visit VeteransCrisisLine.net for more resources.